We are very pleased to welcome Matthias Heyne to the Department of Linguistics, to study for a PhD under the supervision of Professor Jen Hay. In this guest post, Matthias introduces himself. Welcome to Christchurch, and UC! 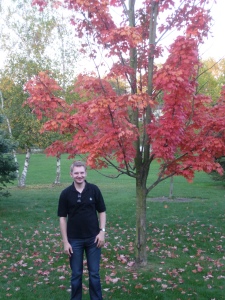 Hi, I’m Matthias Heyne and I’ve just arrived here from Germany. I’m 30 years old and just getting started on my PhD with Jen Hay on the influence of First Language on playing brass instruments. You’re probably now thinking “that sounds a bit exotic” and it really is: as far as I know nobody has done any work on this before! So let me tell you a bit more about myself and you’ll see how this project came about…

I started playing Euphonium at the age of 9 (for those of you unfamiliar with brass instruments: it’s a sort of little tuba) and later picked up bass trombone (and a bit of tuba & sousaphone) while spending a year in the USA as an exchange student. By the time I returned to Germany to complete the last 2 years of High School, I had made the decision to become a professional musician. Accordingly, I started learning the piano and spent countless hours in the practice rooms of our local music school in order to pass an audition into one of Germany’s music schools (tertiary institutions that are usually independent and have 300-600 students). After a few years of studying orchestral bass trombone, I encountered some discord with my teacher at that time and decided to change schools, adding to my studies a major in High School teaching while continuing my degree in orchestral music. As a second subject for teaching I naturally chose English as I thought that it wouldn’t require too much studying, given that I had learned it well while spending a year in the US.

So my interest in Linguistics started to develop when I became a tutor and research assistant for the Professor of English Linguistics at Saarland University, Prof. Dr. Neal Norrick. In my 4 years of working for Prof. Norrick, I did quite a bit of transcribing for a PhD student working on videoblogs and learned the basics of Conversation Analysis and Discourse-Analytical approaches to spoken language along the way. When it was time to write my final thesis for my Staatsexamen (a combined degree including both teaching subjects as well as pedagogy), I chose to do it in Linguistics but with a connection to music, analyzing the interaction of musicians in a brass quintet rehearsal recorded during a semester abroad in Melbourne.

Last November, I completed my final exams in High School teaching but afterwards did not really feel that it was my calling to become a teacher so I decided to explore my options of doing a PhD instead. While enquiring about the UC Doctoral Scholarships, an idea I had had about the relationship of language and brass playing came to my mind and we worked out a research proposal which makes use of ultrasound to record tongue movements.

So here I am as a PhD student in this wonderful place on the other side of the world, hoping to stay involved with music as well as using my free time to do some paragliding which I started learning last summer in Germany.

Welcome to the blog of the Linguistics programme at the University of Canterbury, Christchurch, New Zealand.
View all posts by uclinguistics →
This entry was posted in UC Linguistics news. Bookmark the permalink.